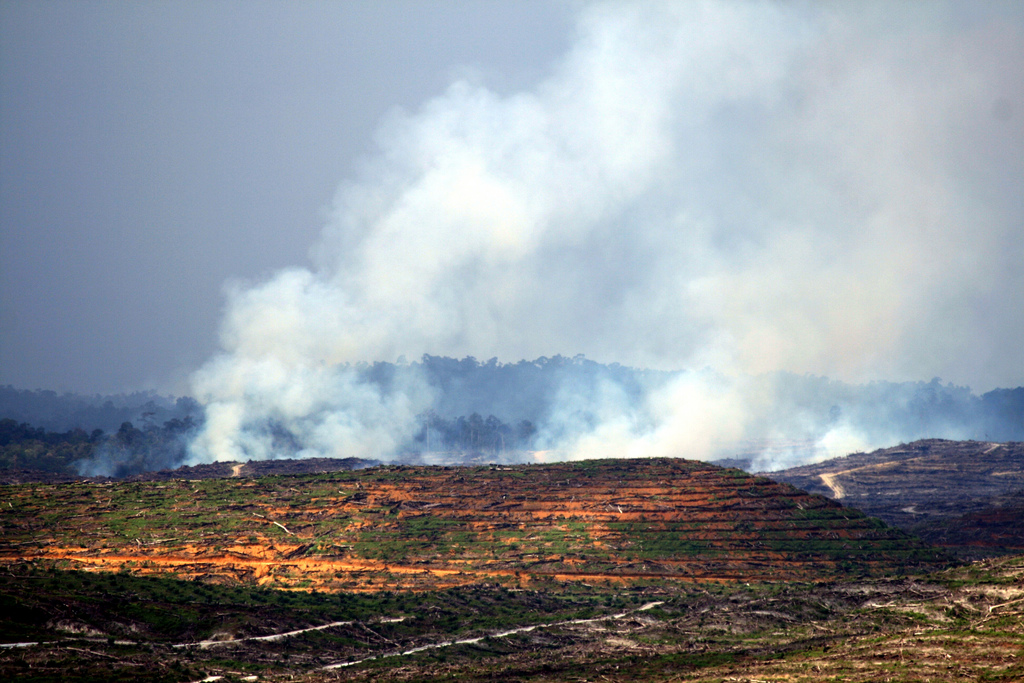 By Susan Minnemeyer, Cecelia Song, Andika Putraditama, James Anderson and  Nigel Sizer Earlier this week, Indonesia’s parliament ratified the ASEAN Agreement on Transboundary Haze Pollution—12 years after first signing the agreement to reduce haze pollution from land and forest fires in Southeast Asia. The ratification of the treaty, combined with Singapore’s new Transboundary Haze Pollution Act, sends a clear and overdue signal that illegal land and forest fires in Indonesia, and the resulting regional haze pollution, will no longer be tolerated. Ratification of the law comes not a moment too soon. This week, fires flared across southern Sumatra and West and Central Kalimantan, jeopardizing Indonesia’s forests and the communities and wildlife that call these regions home. And because a tropical cyclone altered the wind direction, haze and smoke returned again to Singapore. Readings of the Pollutant Standards Index (PSI) surged to unhealthy levels, drawing international attention. You can view near-real time information on the fires, concessions, wind direction, and more on Global Forest Watch Fires (GFW Fires), a fire-monitoring platform developed by WRI, Indonesia’s National REDD+ Agency (BP REDD+), DigitalGlobe, Google, Esri, and other partners. Read on for more analysis of Indonesia’s fires, and how new laws could help crack down on illegal burning.

Fires Spike in Sumatra and Kalimantan

While fires are typically present in Indonesia during the dry season, this week saw a significant jump in the number of fire alerts. Data from GFW-Fires shows 358 high-confidence fire alerts across Sumatra and 527 high-confidence fire alerts across Kalimantan over the past seven days. Sixty-six percent of the fire alerts occurred within the boundaries of oil palm, logging, and pulpwood concessions. The number of fires is a noticeable increase when compared to the past few weeks, especially for the provinces of Central and West Kalimantan, and for Southern Sumatra (see Figure 1). In a pattern different from the last two major fire outbreaks in June 2013 and February and March 2014, the number of fire alerts in Riau Province was lower than in surrounding regions. 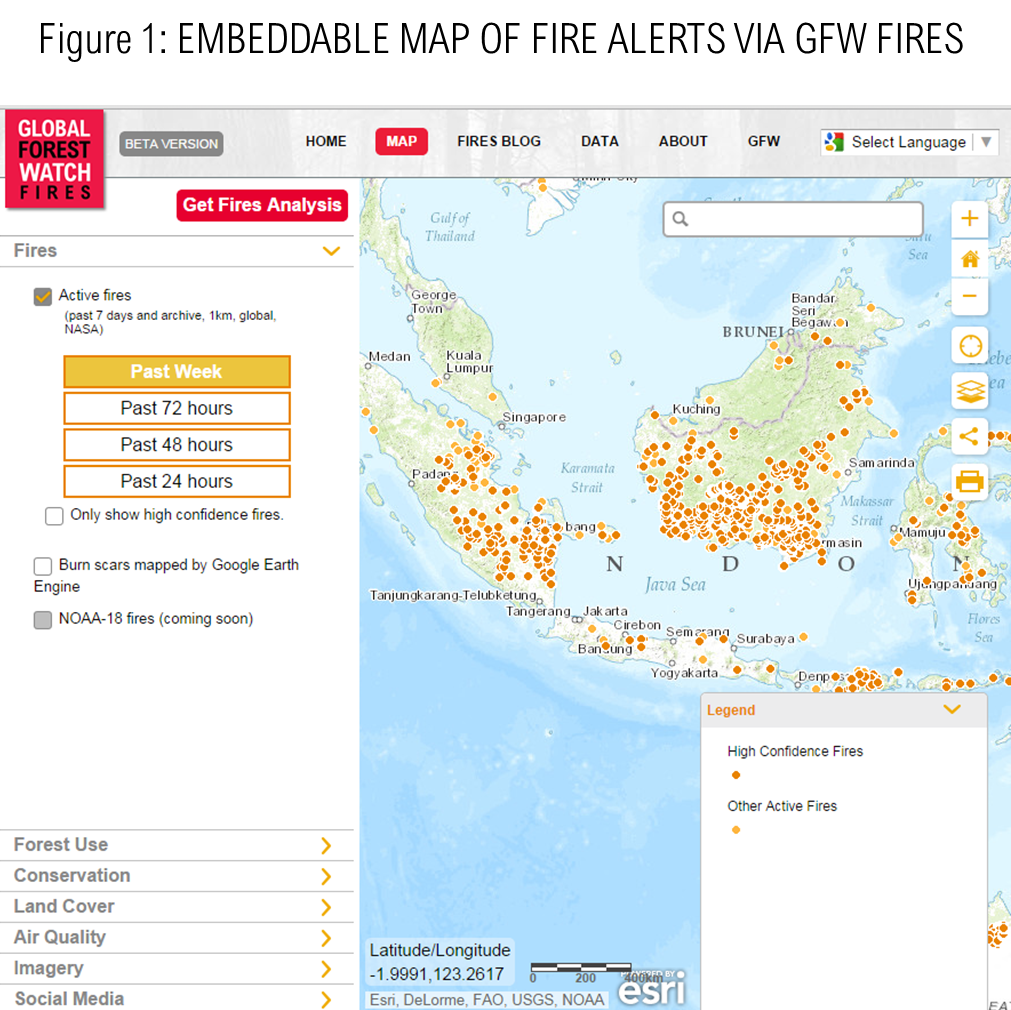 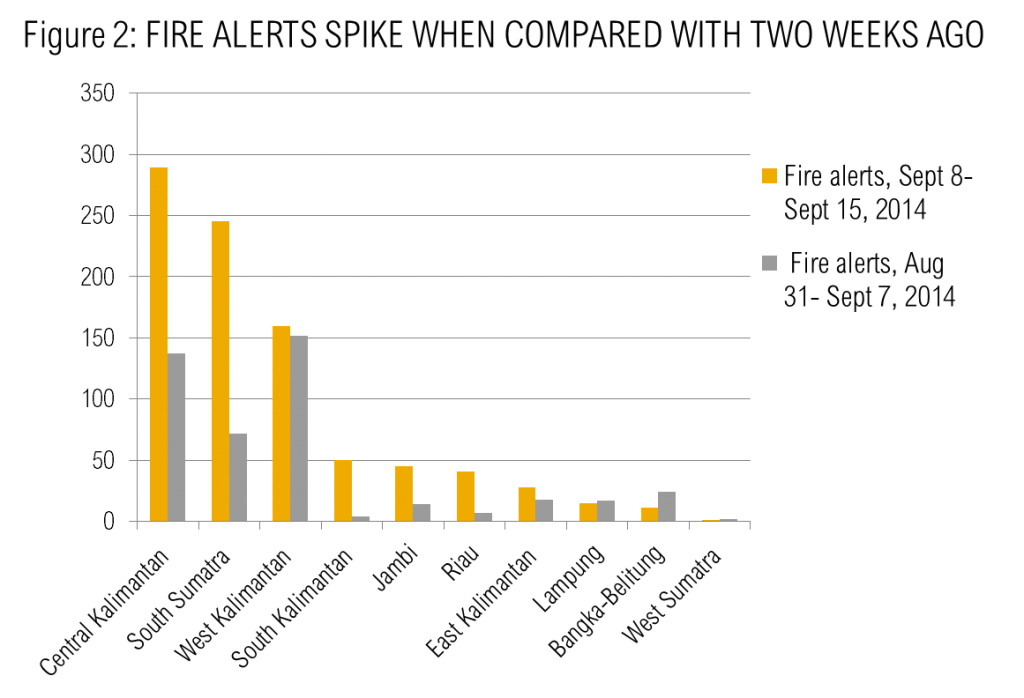 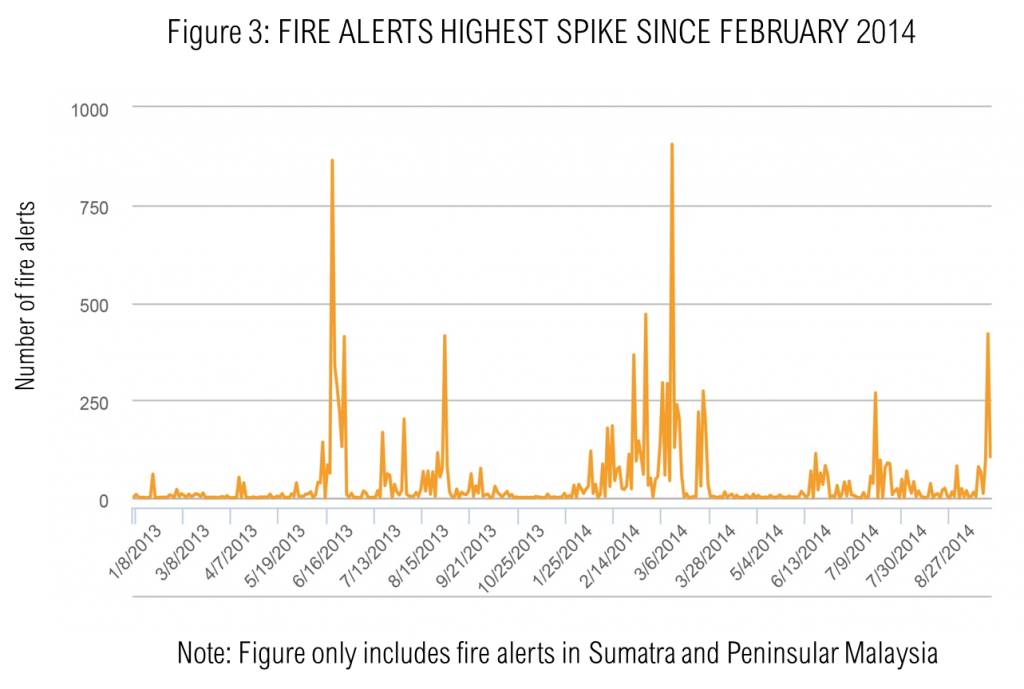 Illegal burning—often associated with logging, timber, and oil palm concessions, or with conflicts over those areas—has long been a problem in Asia, particularly in Indonesia. The new Singapore law permits the government to prosecute and fine companies responsible for fires causing pollution in Singapore—regardless of which country the company is currently operating in—when pollution index readings remain over 100 for 24 hours or more. Air quality readings exceeded this limit for much of the day on September 15, but have since improved following a shift in wind direction. The law also allows Singaporeans to bring civil cases against those causing haze—for example, due to damage to a hotel’s revenue or a person’s health. The real-time wind direction and air quality data on Global Forest Watch Fires suggests that earlier in the week, southerly winds from Sumatra were bringing smoke and haze through Singapore, though the latest wind direction maps seem to indicate that smoke and haze from Kalimantan may be transported to Singapore as well (check the data on GFW Fires here; air quality data is updated hourly, and wind direction is updated four times a day.) The Singaporean government can investigate companies operating in those regions and, if illegal burning is present, take action under the Transboundary Haze Pollution Act. (You can view a list of oil palm, wood fiber, and timber concessions with the highest number of fire alerts on GFW Fires, or refer to Figure 5 at the end of this blog.) 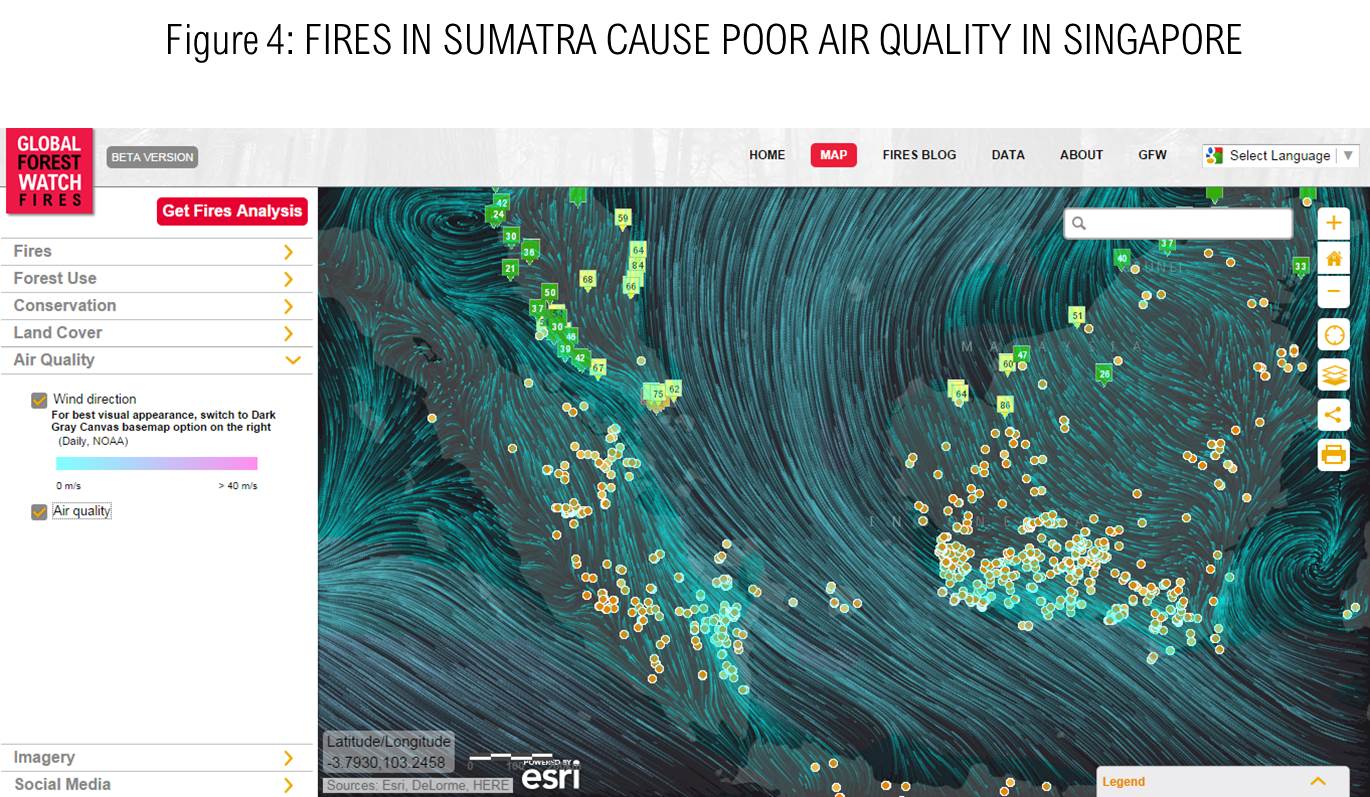 Potential Impacts of Indonesia’s Ratification of the Haze Treaty

Indonesia’s Parliament vote to ratify the ASEAN cross-border haze treaty represents the culmination of many efforts to improve fire monitoring in the country. While the specific articles in the transboundary haze bill are largely already incorporated in Indonesia’s existing regulations aimed at reducing fires and illegal burning, it could create added pressure to enforce those laws. Despite a long history of rampant illegal burning, recent events show that Indonesia is taking the fires more seriously. Outgoing President Susilo Bambang Yudhoyono recently tasked Indonesia’s National REDD+ Agency (BP REDD+) to strengthen efforts on coordination across the government to address fires. The agency, working with other branches of government, established a “situation room” for fire response. By using real-time tools like GFW Fires, it’s working to reduce fire response time by 80 percent, from 30 hours or more down to two to four hours. Industry has also been stepping up. In June, the Roundtable on Sustainable Palm oil (RSPO) became the first commodity certification body to publicly share the boundaries of their certified production areas, allowing others to monitor fires in those concessions. As with other regulations, the effectiveness of the newly ratified ASEAN treaty will depend on the quality of enforcement. But with near-real time monitoring tools such as GFW-Fires at hand and the momentum mounting to crack down on illegal burning, the future’s skies may be looking brighter. 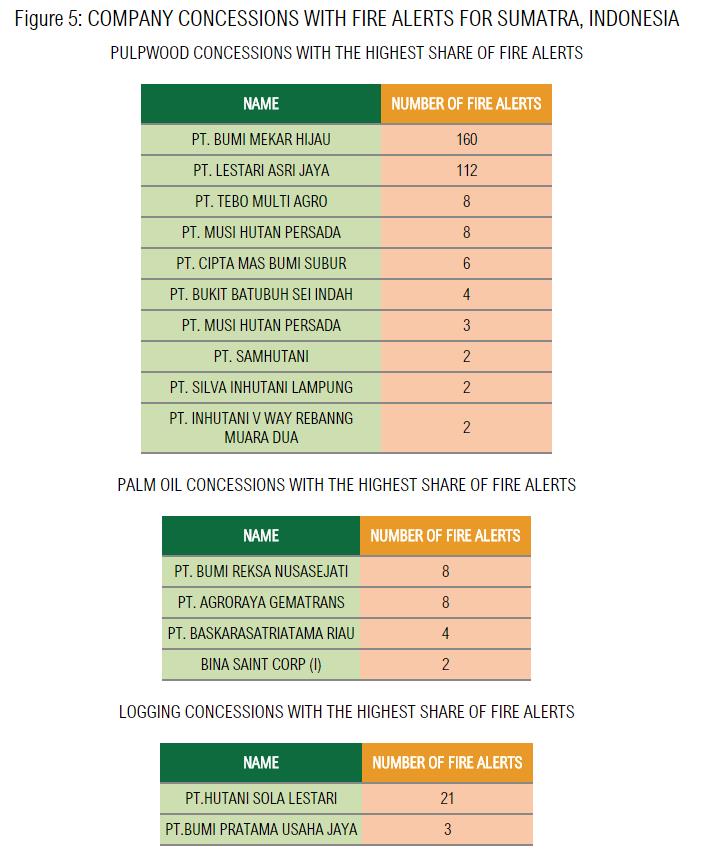 LEARN MORE: For more WRI analysis on Indonesia’s fires, check out our blog series.WRI used NASA’s Active Fire Data to determine the likely location of fires on the ground. This system uses the NASA MODIS satellites that survey the entire earth every 1-2 days. The sensors on these satellites detect the heat signatures of fires within the infrared spectral band. When the satellite imagery is processed, an algorithm searches for fire-like signatures. When a fire is detected, the system indicates the 1 km2 where the fire occurred with an “alert.” The system will nearly always detect fires of 1,000 m2 in size, but under ideal conditions, can detect flaming fires as small as 50 m2. Since each satellite passes over the equator twice a day, these alerts can be provided in near-real time. Fire alerts are posted on the NASA FIRMS website within 3 hours of detection by the satellite. The accuracy of fire detection has improved greatly since fire detection systems were first developed for the MODIS satellites. Today, the rate of false positives is 1/10 to 1/1000 what it was under earlier systems first developed in the early 2000s. The algorithm used to detect fires includes steps to eliminate sources of false positives from sun glint, water glint, hot desert environments and others. When the system does not have enough information to detect a fire conclusively, the fire alert is discarded. In general, night observations have higher accuracy than daytime observations. Desert ecosystems have the highest rate of false positives. Many papers have been published to validate the NASA MODIS active fire alerts for use in various applications. WRI is employing a recommendation for detecting forest clearing fires (described in Morton and Defries, 2008), identifying fires with a Brightness value ≥330 Kelvin and a Confidence value ≥ 30% to indicate fires that have a high confidence for being forest-clearing fires. Low confidence fires are lower intensity fires that could either be from non-forest-clearing fire activity (clearing fields or grass burning), or could be older fires that have decreased in intensity (smoldering rather than flaming fires). The use of this classification establishes a higher standard for fire detection than using all fire alerts equally. Sources: NASA FIRMS FAQ Morton, D., R. DeFries, J. T. Randerson, L. Giglio, W. Schroeder, and G. van der Werf. 2008. Agricultural intensification increases deforestation fire activity in Amazonia. Global Change Biology 14:2262-2276. Data Sources for Figures: NASA Fire Information for Resource Management (FIRMS) Active Fire Data, June 17, 2014 – June 23, 2014 Administrative boundaries from GADM and Center for International Forestry Research (CIFOR)