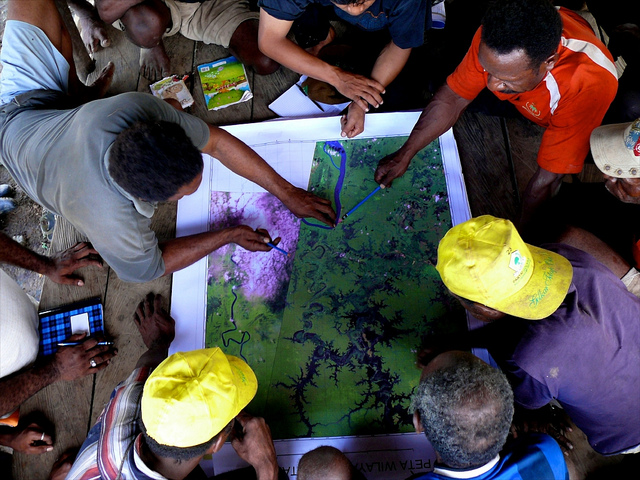 In this update, Global Forest Watch publishes a roundup of top forest news from around the world. Many of these stories demonstrate the power of spatial analysis and open data in monitoring and analyzing forest change and improving forest landscapes. To learn more about GFW, a dynamic online forest monitoring and alert system, click here, or follow us on twitter at @globalforests.

Top Reads of the Week

Backsliding on forests? Brazilian Amazon deforestation continues to increase. Satellite data from Imazon suggests that Brazil’s forest clearance increased by 190% over the past two months as compared to August and September of last year. This is more bad news for Brazil, who saw a 29% increase in deforestation last year after nearly a decade of tapering rates. (via The Guardian) No more ‘flying rivers’. With São Paulo facing its worst drought in eighty years, some Brazilian scientists are tying the lack of rainfall to deforestation in the Amazon. The destruction of trees, which release millions of liters of water into the atmosphere, is permanently altering the regional climate of Brazil, according to scientists at the INPE (Brazil’s National Space Research Institute). Get more background on how deforestation affects rainfall patterns from NASA or Greenpeace. (via Reuters) Exporting deforestation, exporting emissions.  A new working paper links the production of four forest-related commodities- palm oil, soy, beef and paper- in eight countries to nearly one third of all global warming emissions from deforestation (3.9 million hectares of forest loss and 1.7 GtCO2 in 2009 alone). Excluding Brazil, nearly half of the deforestation occurring in these focus countries was driven by export markets, primarily the trade of agricultural commodities with China and the EU. (via Mongabay)

It’s not all bad news in Brazil. The Brazilian government created a new forest reserve in the Amazon, putting 6,680 square kilometers of pristine forest under federal protection. The Alto Maues reserve, located in Pará province southeast of Manaus, will contribute to Brazil’s climate mitigation policy and protect the 13 species of primates and 600 species of birds within its borders. (via Reuters) Colombia releases first deforestation report. For the first time, Colombia released a report detailing its yearly deforestation, estimating that 120,933 hectares were cleared between January and December 2013. While based on a different methodology, this data suggest a decline in forest loss compared to Colombia’s 208,000 ha of forest loss in 2012 documented by Matt Hansen/University of Maryland. (via Mongabay) Another haze policy, but what will it change? Malaysia and Indonesia are currently drafting a bilateral Memorandum of Understanding to combat transboundary haze stemming from forest fires, but it is unclear how it will differ from the ASEAN Agreement on Transboundary Haze Pollution ratified by Indonesia last month. This news comes after a summer of fires, haze, and pollution across Southeast Asia. (via Borneo Post)

Quiet approval for controversial dam.  India’s proposed 3,000MW Dibang dam, twice rejected by India’s Forest Advisory Committee of the Ministry of Environment and Forests for its potential impacts on high-biodiversity forests and local peoples, was quietly approved. While official details from the Forest Advisory Committee have not been released, activists believe that the dam will flood 4,300 ha of dense forests in Arunachel Pradesh’s Lower Dibang Valley District, threatening endangered species such as the Bengal florican and community fishing and farming areas. (via The Guardian) Tenure necessary for climate adaptation. In Uganda, insecure tenure in customary lands (especially for women) contributes to environmental degradation, especially in sensitive areas such as wetlands or forests. With the fear that landlords may revoke access to the land or raise rents, tenants do not often pursue long-term climate adaptation action or tree planting. (via CGIAR)

Scientists say no to proposed Nicaragua canal. Citing critical threats to forests, water security and local livelihoods, the Association of Tropical Biology and Conservation (the world’s largest scientific body of tropical biologist and conservationists) called on the Nicaraguan government to halt work on the project until independent environmental assessments can be completed. The proposed 300 km canal route passes directly through multiple protected areas, the scientists note that it will be effectively cutting the Mesoamerican Biological Corridor in half. (via Mongabay) New law complicates Indonesian forest conservation. In a study of Golden-Agri Resources’s Zero Deforestation policy, Greenomics highlights how a recent revision to Indonesia’s Plantation Act may threaten business efforts to conserve forests. Under the new law, areas with a Hak Guna Usha (Right of Cultivation) permit must be cleared and planted within six years of the permit filing. This includes any High Carbon Stock or High Conservation Areas within plantation boundaries that companies might want to preserve. (Via Mongabay) Nothing gold can stay. An uptick in gold mining on the Guiana Shield, a vast, forest-dense region in Northeast South America, might turn it into a deforestation hotspot. Researchers from SarVision (a remote-sensing spinoff from Wageningen University in the Netherlands) have linked deforestation to multinational mining companies, as well as small-scale operations, and believe that mines in the area are continuing to expand. (via Mongabay)

California, here it comes. California is the only non-tropical jurisdiction to consider recognizing carbon credits from REDD+ in its cap-and-trade scheme. Although it is a member of the Governors’ Climate & Forests Task Force (GCF), it has not signed the Rio Branco Declaration, in which tropical governors pledged to slow deforestation in exchange for performance-based payment. Many believe that California’s participation in REDD+ could catalyze action in the GCF, bolstering the necessary investments and driving down the deforestation rate in the Amazon. (via CIFOR) Where the rubber meets the road: capacity gaps in Central African REDD+. A new study from CIFOR highlights the need for continued capacity-building to support climate adaptation and REDD+ policies in the Congo Basin. They found that key policymakers and stakeholders struggled with climate concepts and terminology, especially with the aims of REDD+. Better public education on environmental issues, climate training for journalists and outreach to policymakers would improve policymaking in the Congo Basin. (via CIFOR)

Spatial analysis, remote sensing and crowd-sourcing for the environment

Save the date for Ecohack. Ecohack, an event where programmers, environmental policy wonks, conservationists, students and data scientists get together to create innovative solutions to environmental solutions, will be happening in six cities across the globe on November 15-16. Ecohack will take place alongside the IUCN World Parks Congress in Sydney, with simultaneous hacks happening in Cambridge, U.K., Washington, D.C., New York City, Madrid and San Francisco. Learn more at http://ecohack.org/. What can satellite imagery do for you? In collaboration with Google Earth Outreach, Skybox Imagery announced a new project called Skybox for Good, which will provide partner organizations with high-resolution satellite imagery. So far they are monitoring land use in areas cleared of landmines in Sri Lanka, and provided imagery of mountaintop-removal mining in West Virginia. (via Skybox) A constellation of sensors. We need to better coordinate and network the vast range of remote sensing data to effectively monitor biodiversity and environmental change, argues a commentary in Science. Indirect remote sensing data from satellites and airplanes used to model environmental and climatic change can be better integrated with micro-level data from in situ sensing (animal tagging, camera traps, etc.). Finding ways to share all of this data effectively, such as through the Group on Earth Observation’s Biodiversity Observation Network, will be key for protecting biodiversity. (via Science)

GFW News Roundup: Forest stories from around the world that demonstrate the power of spatial analysis and open data in improving management of forest landscapes. This News Roundup was in collaboration with the Forest Legality Alliance. Top Reads of the Week: “U.S. Customs in Houston blocks import of Amazon rainforest timber,” 7 December, Houston Chronicle Seventy-one […]

GFW News Roundup: Forest stories from around the world that demonstrate the power of spatial analysis and open data in improving management of forest landscapes. This News Roundup was in collaboration with the Forest Legality Alliance. Top Reads of the Week: “Forest destruction can be cut in half,” 30 November, Climate News Network The need to […]

GFW News Roundup: Forest stories from around the world that demonstrate the power of spatial analysis and open data in improving management of forest landscapes. This News Roundup was in collaboration with the Forest Legality Alliance. Top Reads of the Week: “Two Forest Rangers Pay the Ultimate Price for China’s Demand for Rare Wood,” 17 November, TakePart It […]